To create my own restored version in 2008, I used the following sources for the tracks included on my final CD:

Well, if you see the list first, it looks very much, but most of the different sources were taken for the bonus section.
The complete original album was taken from the 2001 version of the Astley / Tretow remasters. I could also use the 1997 version, because both are absolutely indentical in sound and level.

As you know, most parts of the album were recorded on digital equipment, so you have nearly no hiss or other noises on the tracks. The only things I fixed were a little click in the song "I Let The Music Speak" and an audible noise between "Slipping Through My Fingers" and "Like An Angel Passing Through My Room", when the ticking clock connects both tracks. You have to turn up the level of your headphones to recognize it.

On some CD versions, the track "Cassandra" has a major drop-out in the intro on one stereo channel, but there are some compilations out there without the damage. I am not sure which one I used back in 2008, but my final version sounds excellent.

The drop-out on "I Am The City" around 1:50 was a really hard work...in 2008, after some hours of trying to fix it, I gave up and used a not really perfect version (to my ears). In late June 2011 I opened the track again and two hours later I got it...!!! I had to use a very small piece from the terrible 2008 remaster of  "More ABBA Gold", but now it is close to be perfect !!! I am sure I will rework the small drop-out again sometimes...

In April 2002, the long awaited Deluxe Edition was released and I used to take "I Am The City" from that version. Either the remastering engineer restored the prominent dropout to full perfection or a new copy from the original mastertape (without the flaws) was made. Now this chapter can be closed forever.

Here are the sound samples:

To make my work complete, it was a MUST to include the holy grail for all ABBA fans: The track "Just Like That" in its final version, mixed and finished in 1982 short before the band decided to make a break without end...

First I checked my original "Take A Chance On Us" vinyl. The sound was okay, but not good enough to work with it. The entire recording has some small drop-outs and audible damages. As we all know, there is no very good available version out there and all the versions you can find on some bootlegs and fan-CDs, suffers from a lot of noise and are in mono. Until today, no stereo version of the final mix was ever shared by fans or collectors.

I listened to other versions, included on different unofficial compilation albums and in the end I decided to work on the version, included on the CD-R version of "Take A Chance On Us". On the booklet you can read "remastered edition", but all the tracks included here are not taken from the original vinyl (or better: the mastertape for the 1988 LP), but taken and compiled from different sources !!!

I had to work many hours to filter the strong noise on that recordings and I also tried to do the best possible restoration job. I also used a special plugin to add some fake-stereo-effect on it to make it sound a little better. In the end I created a version - of course, far away from being perfect, but compared to all different sources I know, to my ears this is the best result until now.

I hope that the final version will be available commercially on the Deluxe Edition of "The Visitors"...but I am sure it will be a dream forever. I can't understand the decision of Björn & Benny never to release the track in its full glory, because it is surrounding in tape-trading circles since more than 25 years and every serious ABBA fan has it on vinyl, CD or stored on harddisc. They could release a CD including this one song only and they would sell millions of it !!!

Unfortunately the track was not included on the 2012 Deluxe Edition, so I am sure it will never be released...we have to wait until B & B will change their minds sometimes...

I filtered some clicks and pops, reduced the hum and did a slightly remastering job to match the tracks to the others, included on my version. The result is very good and to my ears, no better quality is available elsewhere.

With their final album, I closed the restoration project of the regular albums, including all singles and official released rarities they recorded and released until 2011. 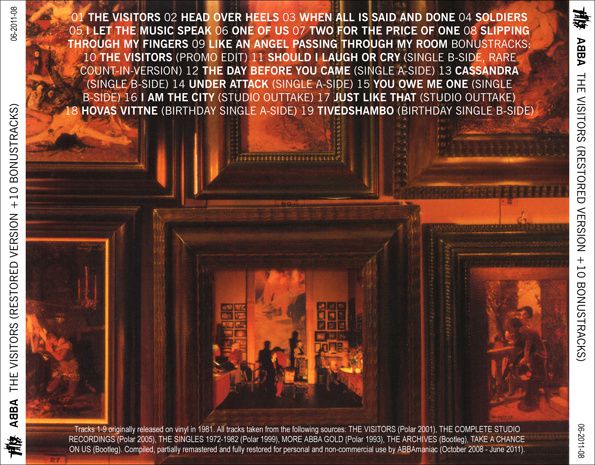 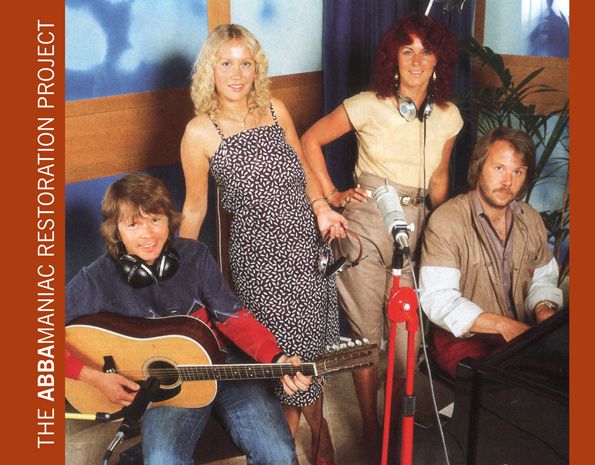